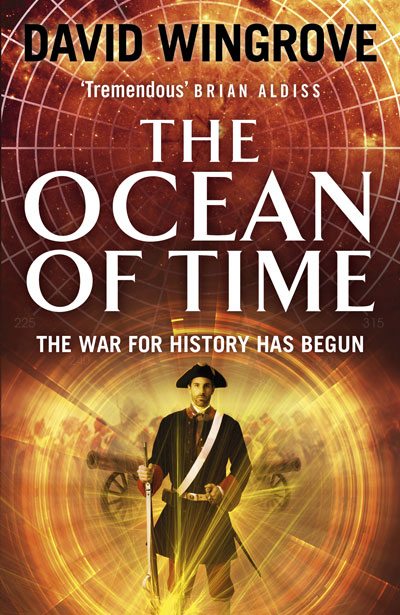 Things have changed. The great Time War between the two great super-powers has been infiltrated by a third party, possibly even a fourth. Who it is, neither the Germans nor the Russians know. Only that he’s clever and elusive. Oh, and his name. Kolya.

Or are Kolya and the mischievous Reichenau the same?

Otto, however, is concerned only with being with Katerina, and, relying on his best friend Ernst to cover for him, they set out on a long journey across northern Russia, to be in Moscow – then a small trading post –before the snows fall.

Only things don’t go well. Otto makes mistakes that cause ripples in Time. And, at an awful little place called Krasnogorsk, Otto and Katerina encounter their alternate selves, their throats cut, their pale corpses laid out in a handcart. Dead.

Returning to their base in Time – Four-Oh – Otto, for the first time ever, begs Master Hecht to let him return and save Katerina, but Hecht has other priorities, the first of which is to go to Poltava, where the Russians are about to lose the great battle there and throw history into disarray.

Increasingly Otto finds himself fighting the newcomer, Kolya, more often, in fact, than the Russians. Only when Otto finally thinks he’ll get to see his darling girl again, he is sent to 1950s California, where Kolya is believed to be operating. There he meets science fiction writer Phil Dick, to whom the notion of Time Travel is meat and drink, who helps him find a way to escape the ‘loop’ that leads to Krasnogorsk.

Otto does find peace, however, in the estate he buys in 13th century Novgorod – Cherdiechnost – which he develops on a humane basis. It is his haven, and it is there he has his five beautiful daughters. And it is Cherdiechnost and his love for all things Russian, that leads to the great peace between the two powers. Only right then – when things are going so well – Kolya strikes again and kidnaps Otto’s girls – all six of them, Katerina included, and is tricked into jumping into a cul-de-sac of Time. Trapped forever.

It’s hard to feel enthusiastic when you know you’re dead.

Even so, I recognise the significance. Poltava. It’s one of those historical cusps. A pressure-point, if you like. And even if the word means nothing to you – in which case you cannot possibly be a Russian – that significance can still be quickly grasped.

Poltava is the first great battle that the Russian empire wins. The grand turning of the tide. It is when the whipping boy becomes the master.

But let me take a moment to explain, if only to give this context.

Long before Hitler, long even before Napoleon, another European ruler tried to conquer Russia, to march an army across the steppes and seize Moscow. That ruler, Charles XII of Sweden – twenty seven at the time of which we speak, that is, the summer of 1709 – was just as much a megalomaniac as his two successors. A child king and most definitely a warrior, he attempted the impossible, and failed, But not by much.

At least, that’s the regular history. But thing have changed. Suddenly, it seems, he’s about to win, and we need to find out why.

Russia in the eighteenth century was a backward place of bearded men in long, thick furs, an insular and isolated place, as strange in its ways as Far Cathay, and, to the western view, every bit as barbarous. The young tsar, Peter the First, changed that. He dragged his country, kicking and screaming, into the modern world, attempting to make a proper European power of it, much as Stalin, years later, tried to transform his basically agrarian state into a centre of industry.

Russia, before Peter, was land-locked. Or almost so. For six months of the year there was Archangel in the Arctic Circle. Otherwise…

Peter changed that. He built a fleet from scratch, and fought for footholds on both the Baltic in the north and the Black sea to the south. And between times he modernized the Russian army, which had always – always – been a joke.

Oh, and he built a city, in the mouth of an icy river, in marshland, in a place so hostile that its builders often froze to death as they worked.

This is a story, then, of two compulsive young men, given by Fate to their respective countries. Implacable enemies, whose ‘Great Northern War’ dragged on for seventeen long years. But Poltava … why Poltava?

Because that is where Charles’ ambitions died. That is where Peter – who had avoided open battle for two whole years – finally turned and faced his foe, and crushed him. Sent him scuttling into Turkey with a bare six hundred men – all that remained of the seventy thousand who had marched from Saxony twenty-three months earlier.

Hecht wants me to go in at once, but Freisler, who’s been brought into the discussion, argues against that. He thinks I should undergo a refresher course. Maybe he’s right. Only this once I don’t actually care. What does it matter whether Peter loses the battle if Katerina is dead? What do I care if Russia is cut to pieces by its enemies and shared out like a giant cake?

Because if I don’t start caring then I won’t get back to save her.

If I can, that is. If this dreadful gut feeling I have is false.

And so, with Hecht’s concurrence, I find myself in the immersion laboratory, data flooding into every pore. Or so it seems. And maybe that’s good for me, because for a while the sheer immensity of it makes me forget.

Only the moment I stop remembering, I think of her again,

Hecht is waiting for me when I come out of there.

I hesitate, because for once I’m not sure. In fact, I’m not certain I’m ready for anything any more, only I don’t say that. I just nod and let him lead me to the platform.

I know something’s wrong the moment I step into the tent. Charles, for a start, is standing there, his back to me, looking down at the map spread out across the table. Gathered also about the table are others I recognise – Count Adam Lewenhaupt, Field Marshal Rehnskjold, the two Poles, Stanislaus and Krassow, the old Cossack ‘Hetman’ Konstantin Gordeenko, Mazeppa, his friend from the Zaporozhsky Cossacks and – most surprising of all – Khan Devlet Giray, the Sultan’s man.

Their presence says it all. Someone has been tinkering with history big time. Making not one but four, maybe five decisive changes.

Charles turns and, seeing me, smiles. “Otto! Where in God’s sweet name did you come from?’

And he comes across and embraces me.

I look down, taking in the fact that his left foot is unharmed, his riding boot unviolated, then look back into his face…

I look past him at the others…

At least five of them should not be here in Poltava at all: the two Poles, Mazeppa, Gordeenko

and Devlet Giray. In our time-line, all five disappointed Charles, depriving him of some 36,000 troops. As for Lewenhaupt, he was never consulted, never given his battle orders by his rival, Rehnskjold, and to see him there at the map table is as much a shock as anything.

And that too is different. So different that that fact alone should swing the battle in Charles’ favour, let alone the rest. Peter doesn’t stand a chance. The Russians, well, they might as swell cut their own throats as to try to contain the Swedes with such advantages as they now possess.