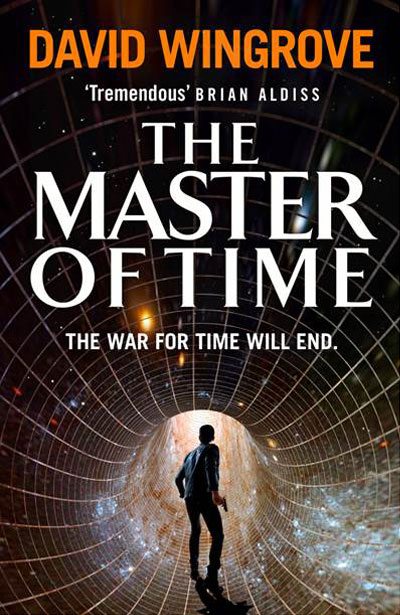 Otto has been taken, kidnapped by Kolya while attempting to save his daughters and trapped in New York in November 1984, in a world where Philip K Dick has become President of the United States and where word of Arnold Schwarzenegger’s latest film, The Terminator, is on everybody’s lips.

Saved from this cul-de-sac of Time, Otto returns to Four-Oh to find that peace has broken out between the battle weary Russians and Germans, with Otto – as newly appointed Master of Time – at the centre of it all. Only Otto’s girls are still missing in Time and he cannot rest until he has found them and brought them back.

That clash – between being a good father or a dutiful Master – dominates this final book. It is a long road, one which leads through the hell that is Krasnogorsk, and whilst their enemy Reichenau is finally taken, the evil Kolya remains, defying all of Otto’s best efforts to capture and kill him.

Gehlen, once a man and the originator of the Time Equations but now part of the Artificial Intelligence that controls Four-Oh, proves a jealous creature and, with a malicious whimsy, shuts down the life-support systems that make Four-Oh habitable. Otto, half suffocated, gives the order to abandon Four-Oh, shutting it down and switching operations to the other ‘time bunker’, Moscow Central.

Time passes. Otto and Katerina find themselves in one final battle – in the Teutoburg Forest in nine AD, with the German tribes, fighting the Roman legions under the command of Quinictilus Varus Publius.

Having unified the great Time Enemies, one by one Otto finds his daughters. All but his darling Martha. Reluctantly he calls off the search for her. It is an end.

Only there are no real endings in Time. Only loose ends and repetitions and loops. Loops which ultimately lead Otto back through a maze of endings – back to the beginning, where – in a part of his life he does not recall – Otto was first pitted against their arch enemy, Kolya.

It is there, in old London, in 1709, that Otto encounters the great Bard himself, William Shakespeare, who, influenced by Otto,  writes a new play – ‘Of Time And Tides’ – his greatest play, as it turns out; a tale of time travel and mystery and love.

While somewhere else, long centuries on, we find Martha, ‘The Lost Girl’, pursuing a war that stretches across time and space. Against the one true Master of Time … Kolya.

And there, in the flesh, is Kolya, waiting beside one of the huts, his two assistants and the cart nearby, on which there are two corpses.

And so the wheel turns once more and I see Kolya purchase Katerina and I from that cunt, Prince fucking Nevsky. I hear Kolya’s triumphant laughter peel out, and as he turns, witness the sheer malice in his eyes. , and then the shock in mine as – for the first time – I see my own body on the cart, Katerina dead beside me.

It is an awful, awful feeling. Yet even as Nevsky hands the ends of the ropes to Kolya, I can see how the Russian agents look to each other, as if ashamed. And sudden understanding comes to me. They know. They know I am their Master now. So this…

Only even as I work this out, my other self has gone down on his knees before Katerina. “This is it,” he says, his voice breaking. “Do you understand? This is the end, my love. They’ve won.”

And he vanishes, pulled back to Four-Oh by Zarah and Hecht.

And Kolya? Kolya lets out an angry bellow and rushes towards Katerina.

But before he can travel half the distance to her, Zasyekin and Rakitin, two of the Russian agents, step out in front of her, swords drawn.

Kolya hesitates, uncertain suddenly just what is going on, and as he does, so another of the Russians, Pavlusha, turns and, taking a gun from his belt – a staritslii, I note, orders Nevsky to get down from his horse.

There is a sudden flicker in the sky, like lightning, only the sky is clear and blue. A moment later there is a great crackling noise, like over-amplified static. It seems almost natural, but the hairs on my neck bristle, knowing what it is. The time-line is drawing to its close. It is, in a very real sense, beginning to break up.

Nevsky, not recognising what Pavkusha is pointing at him, asks angrily what the fuck they think they are doing.

“Get off your horse!” Pavlusha repeats threateningly, and to let Nevsky know what the power of the weapon in his hand is, lets off a bolt past his ear, setting the pines behind him on fire.

Nevsky yelps with fear, his face changing almost comically at this demonstration. Panicked, he scrambles down off his horse.

But Kolya isn’t done. “Give me the woman!” he orders, making to push past Zasyekin, but Zasyekin isn’t having any of it. He pushed Kolya away, then places the point of his sword against his chest.

Thus far I have held back, waiting to see what happens, but now I step out, drawing my own laser – a spica – as I come into view.

“You took your time,” Zasyekin says, with a weary familiarity. “Put the pendant on her and let’s get out of here. Can’t you see what’s happening?”

And as he says this, so suddenly there are two of me, our words just slightly out of phase. In fact, there seems to be two of everyone at that moment with just the slightest differences in their movements and their positions, showing how this time-line is splitting into two very distinct possible alternatives.

I glance to my side and see myself looking back at me. But in the very next instant I am singular again, the whole scene back to normal.

“Come on!” Zasyekin yells, only there is a distinct echo to his words, and at the same time there are whispers of other words, sudden ghostly images of other movements – of Kolya attacking Zasyekin and being skewered, of Nevsky running from the clearing, and of Katerina turning towards me. And yet no one has moved.

Where the river was is suddenly a dry earth gulley. The trees are suddenly bare of leaves and blackened. Ash covers the floor of the forest. And then that vision is gone and four of each of them stand there, faintly overlapping, that slight difference in words and movements more exaggerated this time. It’s like four separate realities are running at one time, and then, as before, it snaps back to normal… or almost so, because now there are small, black, three-dimensional patches floating in the air, like parts of it have been erased. And at the edges of those small black holes, reality is fraying, turning slowly to mist and darkness.

Seeing me, Kolya shrieks and, moving back a pace, draws a big, snub-nosed state-of-the-art stun gun. It’s clear he means business, and it’s not Zasyekin he’s interested in. He knocks Zasyekin aside with a blow that fells the agent, then aims the gun at me, but even as the charge leaps from the mouth of the gun toward me, so I sense someone flicker briefly into existence just at the corner of my eye. I can’t make out who it is, but their warning cry comes a moment too late as the charge strikes me full in the chest.

There’s an instant of excruciating  pain, and then Time seems to jump backwards so that, unharmed, I see Kolya draw the big, snub-nosed gun from his belt. But this time, even as Kolya knocks Zasyekin aside with his free hand, another person jumps into the clearing. It’s young Saratov, and while all the rest of us are hesitating, he takes action, firing his handgun three times, blowing Kolya clean off his feet!

I turn to Saratov. “What the fuck are you doing?”

“Getting you out of there! All of you!”

He throws Zasyekin a time-pendant for Katerina, then turns back to me and throws me two more .

And even as he says it, so the whole scene seems to twist weirdly, like it’s all been pulled inside-out through a huge, three-dimensional lens. The very air shudders, like it’s the skin of a drum that’s been struck. Our images duplicate briefly, eight faint overlapping images this time, including one of Kolya hauling himself up off the ground, stun gun in hand.

There are endless whispers now – words said not here but in other time-lines – but when it all comes together again, Kolya is lying there, perfectly still, his steaming blood pooling beneath him.

I hold the pendants up to Saratov, seeking an explanation. “I don’t understand…”

“No time,” he answers. “Just get to the cart and put the damn things on the corpses!”

I don’t hesitate. I just do what I’m told. Yet as I make to lift Katerina’s head, I gasp.

Despite the ugly grey pallor of her flesh, the small, dark circle of the chest wound. So too is my other self. I put the pendants on and turn, but as I do, so the scene appears to split, parts of it beginning to fragment.

The dark patches have spread, forming long ribbons of black emptiness. Three separate Nevskys can be seen, crawling away in different directions, their eyes staring madly, as if they’ve fallen into hell.

The air crackles with static and there are jumps, like reality has been cut into individual frames and edited back together badly. I know we have only seconds to go now, and as I look about me frantically, I see first Zasyekin and then Pavlusha vanish. Katerina, a look of utter surprise on her face, is next to go, and then Rakitin and the other Russian agent, Tyutchev. He looks to Saratov, who tells him to jump.

Only he can’t jump and leave the two on the cart.

“Jump,” Saratov pleads. “Please, Otto. You’ve done all you can for them. You’ve put the pendants on. There’s nothing else you can do. But if we lose you…”

Saratov’s words are overlaid with slight variations in how he said it. Moment by moment the scene is getting darker and stranger, with echoes and doubled images and strangely ghostly variants, and everywhere those streaks of absolute darkness, like three dimensional tears in the canvas of reality. And all the while it flickers and crackles like some very poor quality copy, growing grainier instant by instant.

“Now-now-now-now-now-now…” echoes from Saratov’s throat, and then suddenly he splits and breaks and… shatters like a glass decoration dropped onto a hard stone floor.

I stand there, staring, the shock of it finally getting to me. And, putting my hand to my chest, I jump…