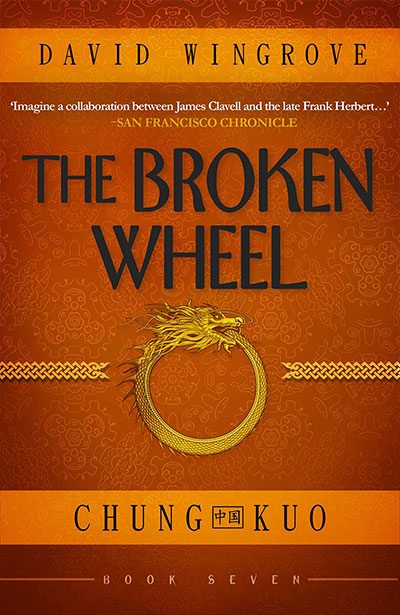 The ‘War of the Two Directions’ has intensified. Ko Ming – ‘revolutionary’ – activity is rife, culminating in the Ping Tiao attack on the Bremen stack, which kills over fifteen thousand innocent citizens. Behind this, and behind a new splinter cult, the Yu, is our old friend DeVore – or, at least, a convincing copy of him – while at his side is the emotionless albino, Stefan Lehmann, son of an old Dispersionist leader, and as cold and cruel as DeVore himself.

Whereas once there was unanimity, now things are far from well within the Sevenm with the odious Wang Sau-leyan sowing the seeds of division between the T’ang. For Prince Li Yuan, personal events overtake public considerations, when Fei Yen, heavily pregnant, defies him and goes riding. He kills all her horses – doing the act himself – and she, furious with him, leaves, returning to her father’s house. There, a week later, she rejects him again, telling him that the child she bears is not his.

Kim Ward’s true history of the world – his ‘Aristotle File’ – grows more and more influential with every year, undermining the work of the Ministry, the ‘Thousand Eyes’. Kim has been working for Li Yuan on a new project. Suddenly his life is threatened when the labs are attacked by assassins. Everyone else is killed bar Kim, who – his darkest instincts from the Clay switching in, savagely fights his way to freedom. Afterwards he hides away in the warren of ducts, in a badly traumatised state, until sage and master of wei ch’i, the ancient Tuan Ti Fo, led by a dream finds him and rescues him once more.

With Li Shai Tung’s death, Li Yuan finally becomes T’ang of Europe and one of the Seven. His first act is to have Fei Yen tested, to see whose child it is. Then he divorces her, marrying three new wives; wives who, in time, he will come to love. But for now his heart is empty and his mind numbed by what has happened.

But there’s a new threat to the Seven; the ‘Sons of Benjamin Franklin’, or ‘the Sons’ as they are better known, a group of rich young Americans, heirs to their fathers’ Companies, who want change as fiercely as any lower-level Ko Ming groups.

… At last the bowl was empty. Tuan Ti Fo smiled, holding the boy to him a while, conscious yet again of how insubstantial he seemed. As if he were made of something finer than flesh and bone, finer than yellow earth. And again he wondered about his presence in the dream. What did that mean? For it had to mean something.

Tuan Ti Fo squatted, his legs folded under him, watching the boy. Then, knowing it would be hours before he woke, he got up and fetched his wei chi set, smoothing the cloth “board” out on the floor before him then setting the bowls to either side, the white stones to his left, the black to his right. For a time he lost himself in the game, his whole self gathered up into the shapes the stones made on the board, until it seemed the boards was the great Tao and he the stones.
Once he had been The First Hand Supreme in all Chung Kuo, Master of Masters and eight times winner of the great annual championship held in Suchow. But that had been thirty, almost forty years ago. Back in the days when he had yet concerned himself with the world.
He looked up from the board, realising his concentration had been broken. He laughed, a quotation of Ch’eng Yi’s coming to mind.
‘Within the universe all things have their opposite: when there is the Yin, there is the Yang; where there is goodness, there is evil.’
And in the boy? He took a deep breath, looking across at him. Gweder and Lagasek. Yin and Yang. As in all men. But in this one the Tao was at war with itself. Yin and Yang were not complimentary but antagonistic. In that sense the child was like the world of Chung Kuo. There too the balance had been lost. Yes, like the boy, Chung Kuo was an entity at war with itself.
But the thought brought with it an insight. Just as this world of theirs had been tampered with, so too had the child. Something had happened to split him and make him fight himself. He had lost his oneness.
Or had it taken from him.
Tuan Ti Fo cleared the board away slowly, concerned for the boy. Yet maybe that was his role in this – to make the boy whole again; to reconcile the animal and the human in him. For what was a man without balance?
‘Nothing,’ he answered himself softly. ‘Or worse than nothing.’
He began again, the shapes of black and white slowly filling the board until he knew there were no more stones to play, nothing left to win or lose.
Tuan Ti Fo looked up. The boy was sitting up, watching him, his dark, over-large eyes puzzling over the shapes that lay there on the cloth.
He looked down, saying nothing, then cleared the board and set up another game. He began to play, conscious now of the boy watching, of him edging slowly closer as the stones were laid, the board filled up again.
Again he laid the final stone, knowing there was no more to be won or lost. He looked up. The boy was sitting there, not an arm’s length from him now, studying the patterns of black and white with a fierce intensity, as if to grasp some meaning from them.
He cleared the board and was about to play again when the boy’s hand reached out and took a white stone from the bowl to his left. Tuan Ti Fo made to correct him – to make him take from the bowl of black stones – but the boy was insistent. He slapped a stone down, in the corner nearest him on the right, in tsu, the north.
They played, slowly at first, then faster, Tuan Ti Fo giving nothing to the boy, punishing him for every mistake he made. Yet when he made to take a line of stones he had surrounded from the board, the boy placed his hand over Tuan’s, stopping him, lifting his hand so that he might study the position, his face creased into a frown, as if trying to take in what he had done wrong. Only then did he move his hand back, indicating that Tuan Ti Fo should take the stones away.
The next game was more difficult. The boy repeated none of the simple errors he had made first time round. This time Tuan Ti Fo had to work hard to defeat him. He sat back, his eyes narrowed, staring at the boy, surprised by how well he’d played.
‘So,’ he said. ‘You can play.’
The boy looked up at him, wide-eyed, then shook his head. No, Tuan thought; it’s not possible. You must have played before.
He cleared the board, then sat back, waiting, feeling himself go very still, as if something strange – something wholly out of the ordinary – were about to happen.
This time the boy set the stone down in the south, in shang, only a hand’s length from Tuan Ti Fo’s knee. It was a standard opening – the kind of play that made no real difference to the final outcome – yet somehow the boy made it seem a challenge. An hour later, Tuan Ti Fo knew he had been defeated. For the first time in over forty years someone had humbled him on the board he considered his own.
He sat back, breathing deeply, taking in the elegance of the shapes the boy had made, recollecting the startling originality of the boy’s strategies – as if he had just reinvented the game. Then he bowed low, touching his forehead almost to the board.
The boy stared back at him a moment, then returned his bow.
So you are human, after all, Tuan Ti Fo thought, shaking his head, amused by the gesture. And now I’m certain that the gods sent you. He laughed. Who knows? Perhaps you’re even one of them.