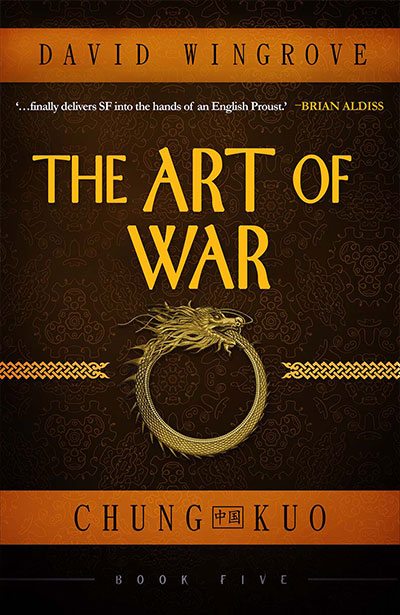 The five year ‘War That Wasn’t A War’ has left the Dispersionists broken, their leaders dead, their companies confiscated. The great push for change has been crushed and peace returned to Chung Kuo. But the ‘War’ has awoken older, far stronger currents of dissent. In the depths of the City new movements have begun to arise, among them the Ping Tiao or ‘Levellers’, who want to pull down the great world-spanning City of 300 levels and destroy the Empire of the Han.

But there are two much greater threats to the ruling Seven than low level terrorists. The most dangerous of these is Howard DeVore. Once a major in Li Shai Tung’s own Security service, DeVore was instrumental in both the assassination of Prince Han, and the ‘War’ that followed. Based on Mars, he has sent in autonomous copies of himself to do his bidding, using any means available to destroy the Seven and their City. The House of Representatives, the Dispersionists, the Ping Tiao – each in turn is used by him and then discarded, cynically and without thought for the harm done to individuals. Aided by a network of young Security officers loyal to him alone, he has fought a savage guerrilla war against his former masters, his only aim, it seems, a wholly nihilistic one: to destroy it all.

The second of these threats is from within their own ranks. With the suspicious deaths of his father, Wang Hsien and all four of his elder brothers, the obese and difficult Wang Sau-leyan has come to rule City Africa, and the Seven, already severely weakened by the loss of three of their eldest and most experienced members, have become extremely vulnerable. Had they not such men as Tolonen, Karr and Kao Chen fighting on their side, it would have been hard to maintain the status quo. But for a time their rule remains unchallenged.

Meanwhile, in the Domain, that idyllic West Country valley, outside the multi-0levelled City, Ben Shepherd, the great-great grandson of the City’s architect, is busy developing a brand new art form, the ‘Shell’. A total immersion virtual reality medium. His fascination with darkness and death colour his early experiments as he takes his first creative steps towards becoming Chung Kuo’s greatest artist.

Chapter 47 – “The Innocence Of Vision”

Ben sat in a harness at the piano, a dummy cage behind him, its morph mimicking his stance. A single thin cord of conduit linked him to the morph. Across the room, a trivee spider crouched, its programme searching for discrepancies of movement between Ben and the morph. Meg sat down beside the spider, silent, watching.

A transparent casing covered the back of Ben’s head, attached to the narrow, horseshoe collar about his neck. Within the casing a web of fine cilia made it seem that Ben’s blond hair was streaked with silver. These were direct implants, more than sixty in all, monitoring brain activity.

Two further cords, finer than the link, led down from the ends of the collar to Ben’s hands, taped to his arms every few inches. Further hair-fine wires covered Ben’s semi-naked body, but the eye was drawn to the hands.

Fine, flexible links of ice formed crystalline gloves that fitted like a second skin about his hands.  Sensors on their inner surfaces registered muscular movement and temperature changes.

Tiny pads were placed all over Ben’s body, measuring his responses and feeding the information back into the collar.

As he turned to face Meg, the morph turned, faceless and yet familiar in its gestures, its left hand. like Ben’s, upon his thigh, the fingers splayed slightly.

Meg found the duplication frightening – deeply threatening – but said nothing. The piano keyboard, she noted, was normal except in one respect. Every key was black.

‘Call mother in, Meg. She’s like to hear this.’

The morph was faceless, dumb, but in a transparent box at its feet was a separate facial unit – no more than the un-fleshed suggestion of a face, the musculature replaced by fine wiring. As Ben spoke, so the half-formed face made the ghost-movements of speech, its lips and eyes a perfect copy of Ben’s own.

Meg did as she was told, bringing her mother from the sunlight of the kitchen into the shadows of the living-room. Beth Shepherd sat beside her daughter, wiping her hands on her apron, attentive to her son.

His hands flashed over the keys, his fingers living jewels, coaxing a strange, wistful, complex music from the ancient instrument. A new sound from the old keys.

When he had done there was a moment’s intense silence, then his mother stood and went across to him. ‘What was that, Ben? I’ve never heard its like. It was…’

She laughed, incredulous, delighted. ‘And I presumed to think that I could teach you something!’

‘I wrote it,’ he said simply. ‘Last night, while you were all asleep.’

Ben closed his eyes, letting the dissonances form again in his memory. Long chordal structures of complex dissonances, overlapping and repeating, twisting about each other like the intricate threads of life, the long chains of deoxyribonucleic acid. It was how he saw it. Not A and C and G Minor, but Adenine and Cytosine and Guanine. A complex, living structure.

A perfect mimicry of life.

The morph sat back, relaxing after its efforts. Its chest rising and falling, its hands resting on its knees. In the box by its feet the eyes in the face were closed, the lips barely parted, only a slight flaring of the nostrils indicating life.

Meg shuddered. She had never heard anything so beautiful, nor seen anything so horrible. It was as if Ben were being played. The morph, at its dummy keyboard, seemed far from being the passive recipient of instructions. A strange power emanated from the lifeless thing, making Ben’s control of things seem suddenly illusory: the game of some greater, more powerful being, standing unseen behind the painted props.

So this was what Ben had been working on. A shiver of revulsion passed through her. And yet the beauty – the strange, overwhelming beauty of it. She shook her head, not understanding, then stood and went out into the kitchen, afraid for him.