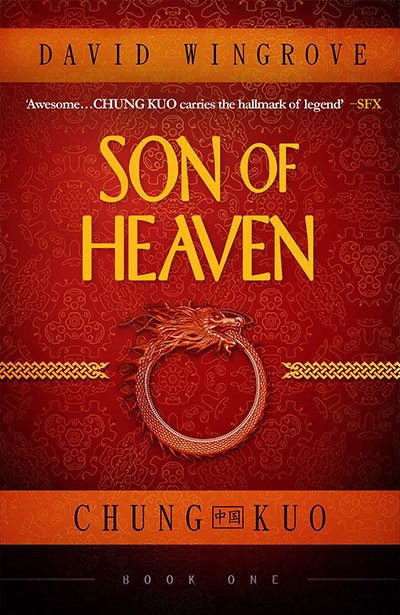 The year is 2065, two decades after the great economic collapse that destroyed Western civilization. With its power broken and its cities ruined, life in the West continues in scattered communities. In rural Dorset, Jake Reed lives with his 14-year-old son and memories of the great collapse. Back in ’43 Jake was a rich young futures broker, immersed in the datscape of the world’s financial markets. He saw what was coming – and who was behind it. Forewarned, he was one of the few to escape the fall.

For 22 years Jake has lived in fear of the future, and finally it is coming – quite literally – across the plain towards him. Chinese airships are ibn the skies and a strange, glacial structure has begun to dominate the horizon. Under the rule of the mighty Tsao Ch’un, a resurgent China is seeking to abolish the past and bring about world peace through rigidly enforced order.

As Jake feared, with the coming of the Han, his life is once more at risk. All those years ago he was on a list of those influential Westerners to be killed – a list that remain active. Fate seems to have finally caught up with him. Yet fortune favours him still, for the man who captures him is none other than Jiang Lei, General of Tsao Ch’un’s Eighteenth Banner Army, better known as Nai Liu, “Enduring Willow”, the greatest Han poet of his age, and a man of honour and sensitivity.

Against all odds, Jake survives this ‘final’ test to earn himself a place within the Han’s brave new world. But can he adapt to the great mile-high world of levels?

Sitting there, his hands and feet restrained, Jake could tell what had happened. It was the Chinese. It had to be. Who else would take such care to erase him from the records. And others, too. Just in case they survived the attack.

Thinking about it, Jake was almost in awe of the mind behind this. He could almost imagine that an AI – some new super-intelligent breed of AI – had done this. Only no. This was too good. Too human. There was a man behind all this. One single mind. A subtle, clever mind bordering on genius. And that mind had a face. He existed – somewhere.

It came back to him. The name he’d been trying to remember. The Han he’d seen on the TV. Tsao Ch’un. That was his name. Tsao Ch’un.

Jake smiled. Realizing just how simple it actually was, he said the words quietly to himself.

‘Just find Tsao Ch’un and you find him. Whoever he is.’

The captain had returned. Jake looked down.

‘Bad news,’ the captain said. ‘Everyone you know seems to be dead.’

Jake looked up at him, shocked. ‘You’re kidding me…’

‘Would I joke about this? No. It seems they killed your friend Joel outside his apartment, an hour back.’

‘However…’ The captain paused. ‘I did check on the hopper. Seems that one has gone missing, only they had no record that it was going to pick you up. Only that its pilot was your friend Sam in there.’

‘So what does that prove?’

The captain smiled. ‘I’m fucked if I know. Only…’

Jake stared at him. ‘What?’

‘The guy at the hopper place… when I mentioned your name, he said he knew you. Said…’

‘It’s just that I checked his records and there’s no mention of you as a client. So either you weren’t a client, or…’

‘Someone’s erased me. All traces of me.’

The captain nodded. ‘Do you want to try someone else? Someone who might still be alive, that is.’

Jake had been thinking about that. ‘Harry Lampton… that is, Sir Henry Lampton. He’s Head of Security for Hinton.’

The captain stood. ‘I’ll give it a try.’

Jake watched the man leave, then sat back.

So what do I know?

He knew this much. That he’d been targeted, both inside the datscape and out here in the real world. They had tracked him down and tried to kill him, like they’d killed George and Joel. Yes, and others. Not only that, but they had anticipated possible failure; had taken the secondary measure of erasing him from the records, and that was no mean task when you considered how much personal information a person accumulated in the modern world.

Or was that what they’d done?

He sat up, alert suddenly.

It looked like an erasure, sure… but what if all of that information had not been erased but moved, ‘shifted’ sideways somehow. Shunted off into the sidings, so to speak.

It made a lot more sense. To trace all of that information and erased it would have been a gargantuan task even for a highly-discriminating super-computer, where as to modify where it was all stored…

Jake was beginning to understand. Their security had been breached at not one but numerous levels. Their encryptions – which they had thought were absolutely failsafe – had been as much use to them as a piece of string to secure a gate.

Jake shivered, thinking about it.

The man anticipates. He leaves nothing to chance. Not a single detail escapes him. An imagination that wide, that precise and yet that flexible.

He smiled, trying to picture in his mind what kind of man this other was. His antagonist.

You play wei ch’I, don’t you? You’re a master of Go. These moves. You see the small patterns and the large. You’re watching the board all the time, placing a white stone here, another there, waiting for us to make a mistake.

The captain returned, this time with the duty sergeant. He bowed, then looked on as the sergeant removed Jake’s restraints.

‘I take it Lampton’s vouched for me.’

The captain met his eyes, surprised. ‘You think this is a single man?’

‘Pulling the strings? Yes. It’s all of a piece. He’s outwitted us. Made us chase shadows.’

Jake hesitated. Did he really want to say? After a moment, he shook his head, then lied.

Only he did. Sitting in the back of Lampton’s private hopper, swinging back over the river, he saw it all clearly for the first time; pictured the man sat at his computer, moving the pieces while his ‘Master’, Tsao Ch’un, looked on.

Old, surely, for such wisdom, such insight didn’t come to the young. And yet young, equally surely for such invention; such originality was not a trade mark of the elderly.

Whichever, their foe had not beaten them. Not yet. They had been savaged, certainly, but a war was not won with a single battle. A genius he might be, but he was still a single man, capable of being killed.

And maybe that was what he should suggest to Lampton. To track Tsao Ch’un down and deal with him. Because wherever Tsao Ch’un was, this one would be with him.

Yes, send an army. Two armies. Maybe ten. But get him. Make sure the bastard’s dead. Then reconstruct. And build it better next time. Stronger.

The hopper flew on, as daylight leaked into the world again.

Yes, we have to kill the fucker. Before he kills us all.