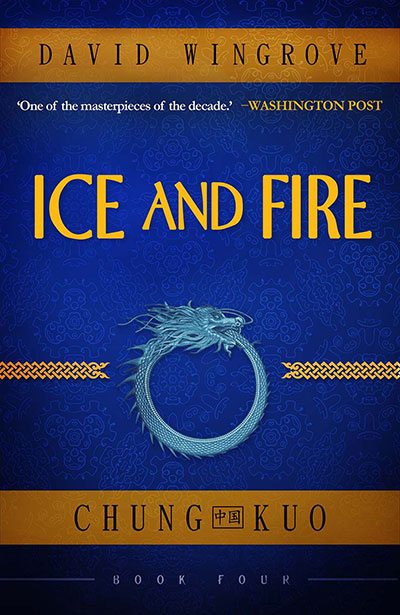 With the death of his father, Tsu Ma becomes T’ang of West Asia, struggling, alongside his fellow T’ang who make up the ruling Seven, to maintain stasis and prevent change, even as the “War That Wasn’t A War”, is fought within the levels of Chung Kuo’s great world-spanning City: a war fought not with armies on battlefields, but with an inventive evil – with bombs and betrayals, brutal assassinations and sly poisonings.

And even as this is happening, other factors – seemingly unimportant of themselves – are adding to the pressure for change. One of these is the child genius, Kim Ward’s creation of ‘the Aristotle File’ – a document that charts the true history of this world, not the version invented and policed by the Ministry – the “Thousand Eyes” – who have, for so long, maintained this great secret, this dark shadow at the very heart of Chung Kuo. Its discovery by the Dispersionists will fuel their ardent desire for change and an end to Han rule.

Lined up against DeVore and the Dispersionists are a handful of men utterly loyal to the Seven – men like General Tolonen, along with the two men he has recruited from the Lowers., Gregor Karr and Kao Chen. Kao Chen’s experiences convince him of the evil of DeVore and his allies, yet it is the giant, Karr, with his supreme athleticism and fearlessness, whom Tolonen uses, like a hawk, to fly against his enemies and destroy the newly-built generation starship, The New Hope. It is this decision, to act directly against the Dispersionists, that will change Chung Kuo for good in what is, effectively, a declaration of war.

Chapter 39  ‘Casting A Spell Out Of Ice’

… T’ai Cho went through to the kitchen, the faint buzz of the printer momentarily silenced, and put on a kettle of ch’a, then went back out and stood there by the terminal, watching the paper spill out slowly.
It was astonishing. Kim had invented a whole history; a fabulously rich, incredibly inventive history. So rich that at times it seemed almost real. All that about the Catholic church suppressing knowledge and the great Renaissance – was that the word? – that split Europe into two camps. Oh, it was wild fantasy, of course, but there was a ring of truth – of universality – behind it that gave it great authority.
T’ai Cho laughed. ‘So that’s what you’ve been up to in your spare time, Kim Ward,’ he said softly, then laughed again. Yes, it made sense now. Kim had been busy reshaping the world in his own image – had made the past the mirror of his own logical, intensely curious self.
But it had not been like that. Pan Chao had conquered Ta Ts’in. Rome had fallen. And not as Kim had portrayed it, to Alaric and the Goths in the fifth century, but to the Han in the first. There had been no break in order, no decline into darkness. No Dark Ages and no Christianity – oh, and what a lovely idea that was: organised religion! The thought of it!
He bent down and took the last few sheets from the stack. Kim’s tale had reached the twentieth century now. A century of war and large-scale atrocity. A century in which scientific ‘progress’ had become a headlong flight. He glanced down the highlighted names on the page – Rontgen, Planck, Curie, Einstein, Bohr, Heisenberg, Baird, Schrodinger – recognising none of them. Each had its own sub-file, like the BRAHE. And each, he knew, would prove consistent with the larger picture.
‘Remarkable!’ he said softly, reading a passage about the development of radio and television. In Kim’s version they had appeared only in the twentieth century – a good five centuries after the Han had really invented them. It was through such touches – by arresting some developments and accelerating others – that Kim had made his story live. In his version of events, Han science had stagnated by the fourth century A.D, and Chung Kuo had grown insular, until, in the nineteenth century, the Europeans – and what a strange ring that phrase had: not Hung Mao, but ‘Europeans’ – had kicked the rotten door of China in.
Ah, and that too. Not Chung Kuo. Kim called it China. As if it had been named after the First Emperor’s people, the Ch’in. Ridiculous! And yet, somehow, strangely convincing too.
T’ai Cho sat back, rubbing his eyes, the sweet scent of the brewing ch’a slowly filing the room. Yes, much of it was ridiculous. A total fantasy – like the strange idea of Latin, the language of the Ta Ts’in, persisting fifteen centuries after the fall of their empire. For a moment he thought of that old, dead language persisting through the centuries by means of that great paradox, the Church – at one and the same time the great defender and destroyer of knowledge – and knew such a world as the one Kim had dreamed up was pure impossibility. A twisted dream of things.
While the printer hummed and buzzed, T’ai Cho examined his feelings. There was much to admire in Kim’s fable. It spoke of a strong, inventive mind, able to grasp and use broad concepts. But beyond that there was something problematic about what Kim had done – something which troubled T’ai Cho greatly.
What disturbed him most was Kim’s reinterpretation of the Ch’ing or, as Kim called it, the Manchu period. There, in his notion of a vigorous, progressive West, and a decadent, static East was the seed of all else. That was his starting point: the focus from which all else radiated out, like some insidious disease, transforming whatever it touched. Kim had not simply changed history, he had inverted it. Turned black into white, white into black. It was clever, yes, but it was also somehow diabolical.
T’ai Cho shook his head and stood up, pained by his thoughts. On the surface the whole thing seemed the product of Kim’s brighter side; a great edifice of shining intellect; a work of considerable erudition and remarkable imaginative powers. Yet in truth it was the expression of Kim’s darker self; a curiously distorted image; envious, almost malicious.
Is this how he sees us? T’ai Cho wondered. Is this how the Han appear to him?
It pained him deeply, for he was Han; the product of the world Kim so obviously despised. The world he would replace with his own dark fantasy.